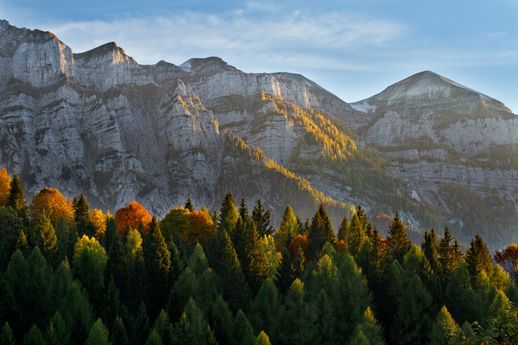 The long mountain range that escalates into the spectacular pyramid shape of Mount Pavione is called the Vette Feltrine range. This chain of mountains divides our territory from the adjoining Feltre area, marking the natural border between the two regions of Trentino and Veneto and the two provinces of Trento and Belluno. From west to east, the Vallazza, Pavione, Col di Luna, Cima Dodici, Pietena and Ramezza peaks are higher than two thousand metres above sea level and constitute the unconditionally dominating natural barrier of Val Noana. They would hermetically close in Val di primiero in the south if it weren’t for the narrow Schener gorge eroded through the millennia by the Cismon stream.

The highest of the peaks is that of the pyramid-shaped Pavione, 2335 metres high, while the lowest is the Vallazza, 2167 m. On the Veneto side, the Pavione loses its particular profile to become a high altitude pasture area, locally known as the Busa delle Vette, in the municipality of Sovramonte.

These peaks, just like the Pale di San Martino, are safeguarded by a park, the National Park of Belluno Dolomites, established in 1993, where they are part of the Vette Feltrine Nature Reserve. Coming from Primiero, they can be ascended following two main routes: from the Vederne all the way up to the Pavione – on a clear day you can see Venice and the lagoon - or from Val Noana up to the Boz mountain hut, a pleasant excursion suitable for less experienced hikers, following a zig-zagging trail. The Vette Feltrine range is also the hub of the last stretch of the Alta Via n. 2 delle Leggende, that joins Feltre with Bressanone, the two historically important cities that in past centuries were archbishopal sees, and virtually links Veneto with Trentino-Alto Adige across the Dolomites most beautiful valleys.
Cookies help us to deliver our services. By using these services, you agree to the use of cookies on the Website. More info
webcam
booking
discover smart
social
Lifts & ski slopes
Outdoor